Brian Green, founder of the New Lodge Centre, died on 2nd September 2015. Brian started life studying art at a College in Greenwich. He became a graphic designer working at several major publishing companies. During this time he was art editor on the Eagle comics. He also taught himself to play the drums and joined a jazz band. Brian soon took over the band and started playing all over Britain at all the famous jazz venues. He also became well known in Europe as he and the band travelled to all the festivals in a camper van.

Brian also sang and wrote songs and built a recording studio at his farm in East Sussex. This part of his life ended when his marriage failed and having to look for something new to do he started the New Lodge Centre. He had been roped into helping on rides with disabled children by his wife and he saw the tremendous benefits riding could give. The land in Mottingham became available so he negotiated with the Health Authority to start a centre for disabled riding.

At the time the Centre was just a piece of grassland with no facilities. There was no long term security on the site so no one would invest in the project. Brian invested both his time and money to create the New Lodge Centre as it is known today. The site had become a favourite with local youths and fly tippers and Brian had to patrol the site and act as security. He gained a bit of a reputation at that time for being a “hard man” as he chased vandals off the site and followed fly tipping lorries on his motor bike. 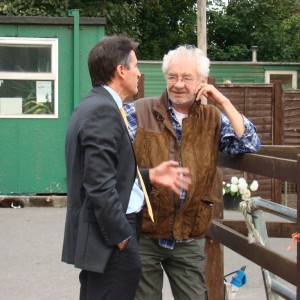 New Lodge is established now and the troubles are a thing of the past, we became a member of RDA in 1981 and now give over 2,000 rides a year.

Towards the end of his life Brian was not as “hands on” as he used to be but he remained Chairman of the group till his death. His wife Amanda has taken on his role of trustee.

Brian’s energy and enthusiasm made the New Lodge what it has become, it is an amazing legacy left by an amazing man. Everyone who knew him describes him as a “gentle man” and he will be very much missed at the Centre.